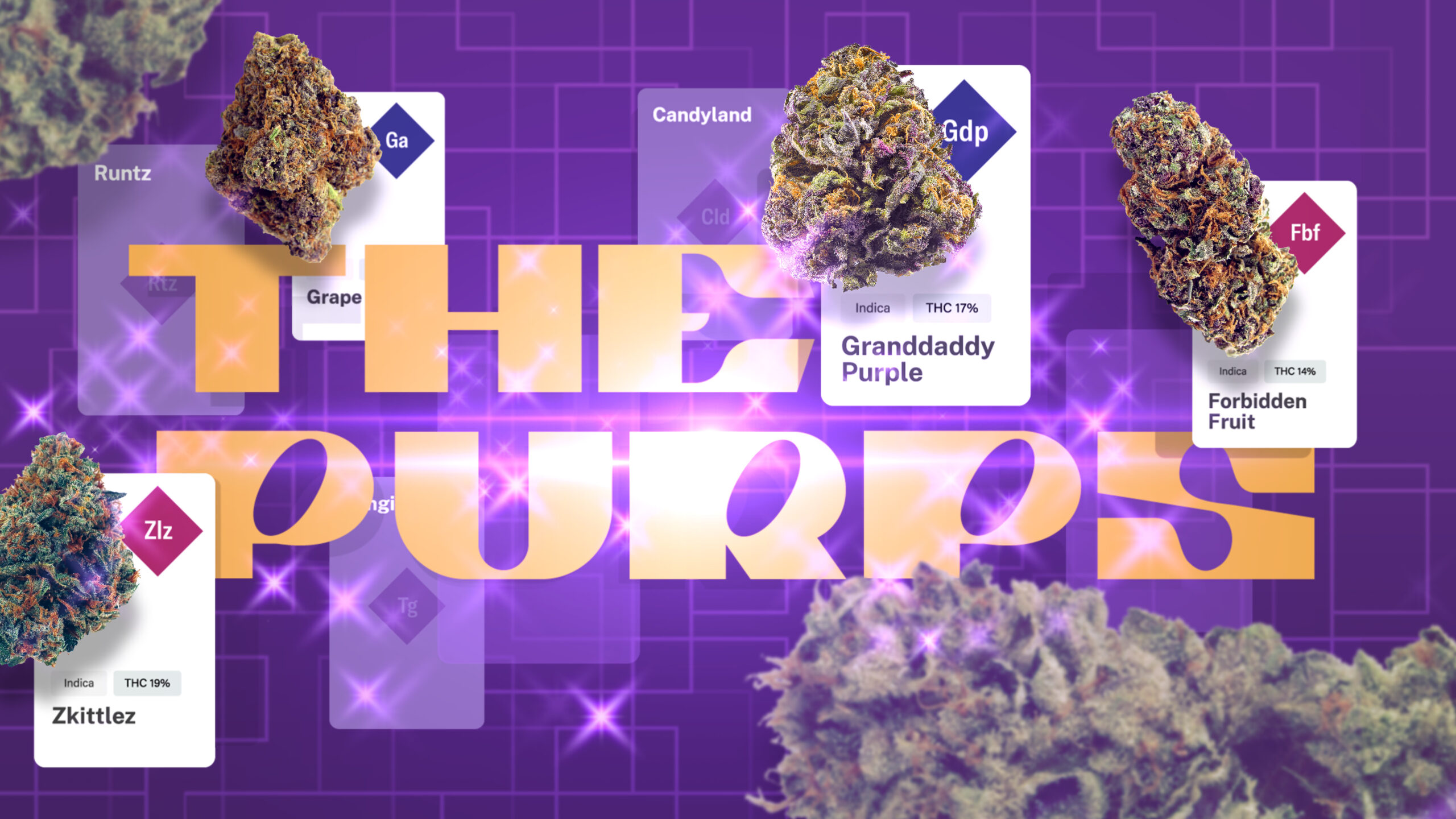 Leafly honors the 50th anniversary of “4:20” (aka “420” or 4/20) this April with a celebration of legendary strain families. We’ve already covered famous Hazes and the Tangie family. In this installment, we show our pride for the Purps.

Purple signifies the color of royalty and, in the case of cannabis, also mystique.

On dispensary shelves, purple means pungent, powerful, trendy herb—a stoner truism since at least the ’90s. To this day, some weed lovers in the US will only buy cannabis that is purple.

But how did Purples become cannabis royalty? Leafly wades into the murky origins of ‘The Purps’ below.

Despite its immortalization in rap songs by the likes of Drake and Juicy J, and numerous Cannabis Cup awards under its belt, good luck finding old-school Purple weed on a dispensary shelf.

Breeders like “Ghost” of ABF Genetics and companies like Purple City Genetics of Oakland, CA, told Leafly that there are multiple generations of purple weed, and determining the real from the fugazi cuts isn’t obvious.

Eric Rosen at PCG considered Purple Urkle, Mendocino Purps, Granddaddy Purple, Silverback, and Lavender leaders of the original wave of Purple popularity in the early to mid-2000s. A lot changed since then, so much so that many behind the scenes see the 2020s as the perfect time for a purple revival.

Identifying members of the Purps cannabis family involves more than just picking out a color.

Multiple sources told Leafly that a purple color alone can’t tell you if a strain descends from the true Purples. Sometimes even Granddaddy Purple doesn’t come out purple!

The purple expression, he told Leafly, comes from the plant pigment “anthocyanin,” a compound also found in blueberries and raspberries. This pigment molecule creates color, not flavor—even though scientists classify anthocyanin as a type of “flavonoid,” and you’d automatically think “flavor.”

“If it’s only a matter of temperature, then it’s not purple.”

Scientists from PCG agreed, telling Leafly that you can make many strains turn out purple with cold temperatures or different lighting during flowering.

“It has been common knowledge that regulating temperature during cannabis flower development has an effect on anthocyanin production, and from other plants we know that light spectrum can also have such an effect,” said the PCG team.

Growing techniques and seasonal variation, like winter grows or cold snaps, can catalyze color change, but, per Ghost of ABF, “If it’s only a matter of temperature, then it’s not purple.”

Due to its landrace Kush ancestry, Purple is a reported pain-punisher. Patients in the early days of California’s medical marijuana program not only loved its grape-heavy flavor, but how effective and functional the high was.

Jeffrey Oropeza, marketing associate for leading nursery Dark Heart Nursery in Oakland, CA said, “GDP has always been held in high esteem due to its dark coloration and taste, but its effect is what makes it truly special. Instead of making everything numb, like most heavy indicas do, GDP just simply makes things stop hurting.”

Growers Will Perry and Adriana Carlile, founders of Magic Hour Cannabis in Oregon, remembered hearing about Granddaddy Purple back in their native New York, and how hard it was to verify. “It stands out; it’s an immediate allure,” they said.

Tracing the origins of Purps

Rumors abound when it comes to nailing down exactly where purple comes from, but our sources, from Ghost at ABF, to Eric Rosen of Purple City Genetics, to Dark Heart Nursery, to McCormick, agree that the Bay Area put Purples on the map.

McCormick remembered seeing circulating cuts of Purple Kush, a Hindu Kush/Afghan cross, in the mid-1990s, and attributes them to Kenneth Morrow of Trichome Technologies. From Purple Kush comes Mendo Purps and its phenotypes Purple Urkle and Lavender.

It wasn’t until years later that Granddaddy Purple emerged on the scene in the early 2000s, providing that same purple appeal but more easily cultivated than its predecessors thanks to its higher-yielding Big Bud parent.

Dark Heart acquired a GDP cutting attributed to breeder Ken Estes back in 2003, but Ghost pointed out, “Nobody in the Bay ever called it that.”

In an interview with Klub Kush Magazine, Estes said his cut of GDP came from crossing Skunk strains to express purple traits for appearance, flavor, and effect. Estes also said the American Indian communities of Humboldt County, CA shared it with him.

All cannabis strain families contain varying degrees of this taxonomical chaos—breeders claiming an existing strain name for a new cultivar, or naming two different strains the same name, or re-branding an old strain with five new names, and on and on.

“Because of this discrepancy in genetic labeling, it makes it really hard for writers and historians like myself to take origin stories within the cannabis community that seriously,” said McCormick.

By and large, Purple’s exotic appearance and grape-laden terps made up its downsides: murky origins and a longer, less productive flower cycle. Purple persisted through the 2000s.

As the Cookies family of cultivars gained popularity, breeders crossed them to the dominant purple cultivars, creating:

Both provide the darkened tones and sweeter flavor notes. Cherry Pie is also a parent to other purple-descended strains that are heavy on flavor but less so on effect, like the Tangie-forward Forbidden Fruit.

But as lab testing and access to cannabinoid content emerged, quality became a matter of metrics rather than the integrity of the plant.

As Rosen put it, “testing killed purples. Even the best cuts never tested above 16-17% THC.”

The purples out today are purple-adjacent strains that Ghost said commercial breeding “watered down.” They may provide those same grape flavor notes and purple tint, but lack that euphoric body buzz.

The most popular? Probably Purple Punch, a child of GDP and Larry OG beloved for its bag appeal, great nose, and prosperous yields, but lacking that analgesic quality.

A royal future for Purps

Despite a decade out of the spotlight, new Purple descendants command shelfspace in the recreational market, and Purple’s increasing demand extends well beyond California.

Purple City Genetics also thought it was time for a Purple revival. Expect the 2022 harvest in California to include their own genetic innovations like Grasshopper—a Runtz and Gush Mints purple variety—and new crosses of Watermelon Zkittlez and Zookies.

In 2021, cannabis lovers will also see purple weed get a cheeky endorsement by the inspiration for the strain name Purple Urkle.

As a pandemic project, White and his friend and business partner, Brad Melshenker of 710 Labs, have hunted around for an amazing purple strain variety, and perfected their curation of purple genetics. The plan?

“It’s the culture,” White told Leafly. “That’s as much of an initiative as celebrating Purples as well. I’m honored to be associated with the branding of this.”

A timeline of Purple cannabis strains

1960s-’80s: Hippies bring dense, dark, resinous, broad-leaf cannabis back to the US from the foothills of the Himalayas in Afghanistan and the Hindu Kush region

2010s: The debut of Purple Punch inflates a countrywide bubble in the cultivation and production of the cultivar. Supplies surge, quality drops, and the bubble pops.

Got a favorite Purple strain? Let Leafly know in the comments.

The latest in Strains & products

By submitting this form, you will be subscribed to news and promotional emails from Leafly and you agree to Leafly’s Terms of Service and Privacy Policy. You can unsubscribe from Leafly email messages anytime.

What Is CBD Used For?  | #CBDMOVEMENT™ BLOG

#120 – Doctors Steven Kraus and Joel Kahn on the Benefits of Full-Spectrum Hemp...